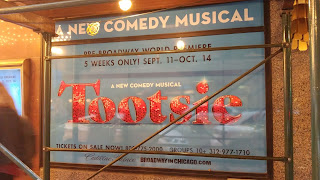 Bottom Line: While it’s unlikely to become a modern musical masterpiece (it’s not Hamilton or Fun Home), Tootsie is a highly enjoyable show and one of the few movie adaptations that I think actually works on the stage. With a little more work on the song list and a more filled out resolution, it will surely enjoy a successful Broadway run and hopefully add to the discussion about what exactly it means to be a feminist.
Posted by Wolfie at 8:58 PM 2 comments: