Geeking Out With Mozart: The Magic Flute and Mostly Mozart 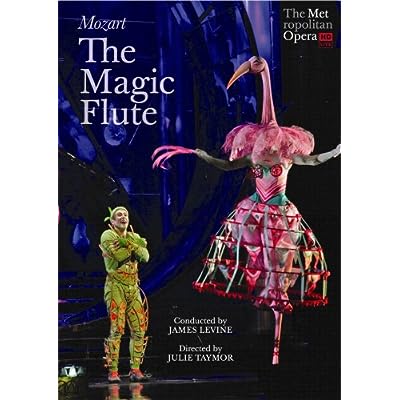 This past week was an extremely culturally geeky one, even by my standards. First I went to see a screening of Mozart’s opera The Magic Flute, a version that was directed by Julie Taymor (of The Lion King on Broadway fame) and filmed at the Metropolitan Opera in 2006. Then later in the week I attended the Mostly Mozart festival at —a classical music festival that lasts nearly a month and features, well, mostly Mozart music.

No surprise, Taymor’s vision of The Magic Flute is stunning. The costumes and scenery are saturated with vibrant color and the few puppet-like creations she utilizes are amazing (like the giant polar bears who seem to glide across the stage due to the kite-like way they’re constructed). This particular production is sung in English, though subtitles are still supplied for those times when it’s still difficult to decipher what is being sung. Listening to opera in English sort of takes away from the foreign romanticism of it and I wish they had kept it in German with English subtitles. It makes me wonder if when Germans and Italians listen to opera in their native language they wish it was in another one. But it was still an excellent production and while it was a little odd watching it on a screen in a movie theater, rather than on stage, it was a far more affordable way to partake in a medium I’m still not fully sure I enjoy.

’s annual Mostly Mozart festival started recently and is running through August 22. Since Mozart is my favorite composer, and I had a chance to attend a concert for only $4, I decided to check out the festival. As luck would have it, the night I went the Mostly Mozart Festival Orchestra wasn’t performing any Mozart music (it is Mostly Mozart, after all, not Totally and Completely and Undeniably Mozart). The concert featured works by Brahms and Haydn, one an inspiration to Mozart and the other inspired by him. Classical music is obviously not for everyone, but if you do enjoy it, the Mostly Mozart festival is a great way to experience it. The various venues in have such a grandiose feeling to them, you can’t help buy feel artistic and cultured just by being seated there. And experiencing classical music live is so much more rewarding than listening to a recording (especially when you get to see guest pianist Stefan Vladar rock out on a Haydn piano concerto). I would gladly return for an evening of culture at the Mostly Mozart festival. I would just like to, you know, hear some music actually composed by Mozart next time.